When I hear vegans argue against raising animals, I tend to agree with them, for the most part. Modern techniques favor confining large numbers of animals in dense areas, where disease is common, food lacks proper nutrition, and the animals are deprived of natural behavior expression.

It’s not only the animals who suffer, but also the land. A lot of good agricultural land and fresh water is needed for modern animal feed, and waste contaminated with antibiotics, insecticides, and other poisons tends to pollute downstream. We can end up eating those poisons when we consume products of these unsustainable practices.

So if the vegans have such a good point, why am I raising animals, like goats?

There were a few years when I tried to regenerate depleted land using just humans as the animal species, which means I had to do a ton of pruning!

You see, when the primary species within the current ecological succession reach complete maturity, they use allelopathy (basically producing toxins) to reduce or prohibit the growth of the other species. It’s a way for those primary species to remain primary after their prime, get a few years or decades of seed production in before the new plants in town take over. Good for them, but it can stunt biomas production and carbon sequester, and regeneration is paused. The trick to avoiding this situation is to prevent those old plants from feeling old, and any perennial horticulturalist knows that this means pruning!

However, not only was it extremely time consuming, but the chop and drop technique was taking a lot of time to actually build the soil. Our contour ditches prevented erosion, but I think a lot of nutrients were lost to the air. I tried making compost and then top dressing that around the edible forest, and it was an improvement, but still labour intensive.

Nature has an easier way. Herbivores! They nourish themselves while giving the land that regenerative pruning which will perpetuate growth and vitality. Even better, they convert much of that biomas into liquid and top dressed fertilizer that can be more efficiently distributed by the soil ecology. And on top of that, they provide sustenance to assorted other species (including us), further improving biodiversity and ecological resilience!

Yes, I confess that I’m pretty addicted to all things dairy, and I admit that the income from selling raw goat cheese is a decent incentive. But, the main reason is that I don’t believe agriculture can be sustainable, much less regenerative, unless it mimics ecosystem dynamics as much as possible.

I’m talking about not just maximizing biodiversity, but focusing on maximizing relationships between species. I’ll discuss how a healthy soil ecology contributes to numerous inter-species relationships, and the stability and resilience that such ecosystems have, in a future post. Also in the future, I’ll discuss insects, like bees. But I’ll get back on topic right now, by honouring the importance of the herbivore within ecosystem dynamics.

Some of you may have heard of Alan Savory, maybe even have seen his controversial Ted talk. I definitely recommend it! He discovered that, contrary to the belief that herds of herbivores generally damage the flora within ecosystems, they more often increase biodiversity, and improve the health of ecosystems above and in the ground. I believe the studies that couldn’t confirm the benefits of Holistic Management were likely the result of the scientific process creating rigid scheduling. Good management comes from constant observation, and feedback loops that make regenerative homesteading an art that uses science. There are many successful practitioners of Holistic Management, like Joel Salatan, paying attention to the land, and modifying the species and durations accordingly.

Modern animal farming is inhumane, and farming without animals is anti-ecological. If we want an agriculture that provides the benefits of healthy ecosystems, we need to add animals to our agro-ecosystems. And that’s one of my main reasons for having all the animals that we have at Finca Sierra y Cielo, especially the goats!

Every day, our two goats are out in the pastures, doing the herbivore thing. Unlike cows, sheep, and pigs (all grazers, with their heads low), goats are browsers. They prefer eating from bushes and small trees, which is a bonus for several reasons: It allows for more biodiverse pastures; Bushes often provide diverse nutriential and medicinal needs; And while the dry season turns the grasses brown, the bushes remain green.

The goats get to browse through a pasture until they’ve pruned the vast majority of it, but before the plants produce tender new buds that could be devoured. That’s usually around two to three weeks, maximum.

Often, I’ll toss the two horses in for the last day or two to munch some of the grasses that the goats don’t want to bother with.

Then I roll up the two lines of electrical fencing tape, pull the rebar posts, and plant them around the next pasture. Moving the fence tends to take me five hours or so, mostly just cutting all the growth that would touch and short the electrical fence. All that cut material is bunny food for days.

Once the goats leave a pasture, it can look pretty devastated, but it sprouts back in no time. Within a month or two, it looks great, but we leave it to recharge and for root systems to develop some more,as well as give enough time for possible parasites to starve before the girls return. That’s been between three and eight months. The dry season can slow regeneration down significantly.

We do give our girls treats during milking, a handful of oats and sprouted corn, molasses in their water, and a sprinkle of minerals that are particularly unavailable in degraded acidic clay soils. 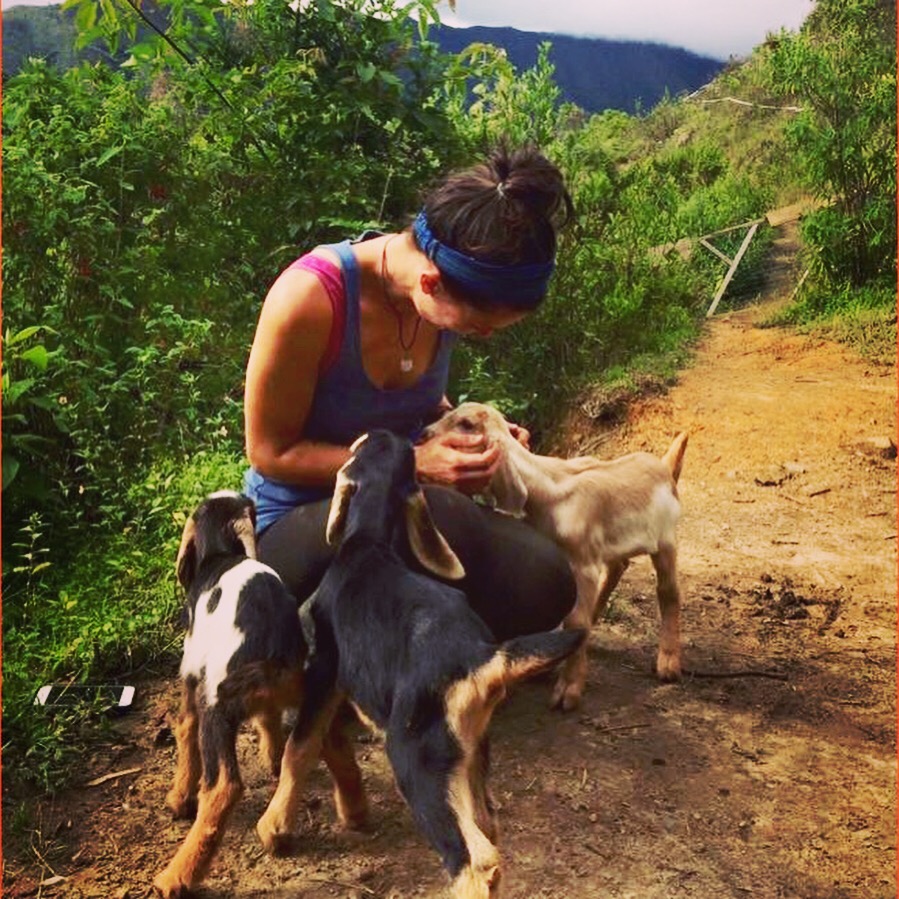 Kristine also loves to make herbal teas whenever we have a goat that’s under the weather, as well as herbal medicines for wounds, hard colostrum udders, etc.

During the night (between late afternoon and morning chores), the goats are in their little house. They enjoy shelter with a view, and the wooden floor is spaced and slanted enough to let their fertilizer through. They sleep cleaner and more comfortable, and the worms get over a wheelbarrow of goodness to play in every week. The goats help our gardens while turning their pastures into paradise!

Ok, I should admit that not all things are easy with goats. I’ve chosen a breed that lacks horns, thereby avoided possible broken teeth or other damage. I’ve also made the choice NOT to have male goats around except every couple years, when it’s time to get the goats pregnant. There’s a reason why lewd men are derided as old goats. Their behavior is as disgusting as their smell. Yuck!

Even though a goat might eat something as ridiculous as plastic, usually just to ‘get your goat,’ they can often be extremely picky. There are some plants that they only eat certain times of year, and some never at all. If I don’t put enough molasses in their water, they’ll go on thirst strike. It’s never enough to hurt themselves, but less water drunk causes a significant decrease in milk. Some people think dairy farmers own and subjugate their animals, but I often feel that they dominate me. This feeling is especially strong when I am the only one caring for them and must attend them twice per day, regardless of whether I want to do something off farm.

Goat behavior, in general, can test patience. They are capricious, after all. If I don’t provide abundant pastures, they will escape, and once out, a goat will calculate what’s dear to you, and eat it. Whether it’s your kale or your shoes, watch out! Butters, when she was living at the Seed Camp, spent one year returning to the gardens to eat… Drip emitters!

The personal reward is the milk. It nourishes the family, as well as the animals who enjoy the whey from time to time. The main use of the milk, though, is to make cheese for a humble income. Because we raise only tiny herds, thereby having an intimate knowledge of their health, we safely produce raw cheeses, just a couple every day.

From time to time, we receive criticism that our cheeses are too expensive. When you calculate the income from a couple years, minus the costs, and divide that by the hours spent milking, fence care, and selling, and take into account the months without revenue but the same costs during pregnancy and early rearing, it comes to about $2.50/ hour for us to manage a process that not only provides delicious nutrition, but does so with love for the animals, as well as regenerates the mountainside, cleaning the air and stabilizing the watershed. You’re damn right we deserve to be paid more.

It always perplexes me that people can whine about the cost of good food, but they never ask themselves why they think they deserve to make or have made what they do, doing whatever they do, while the people who provide them good food and a healthier biosphere, somehow deserve less? Instead of demanding cheaper food, donate to your local ecological farmer, and thank them for their great service!